Posted on June 7, 2013 by dhunterphillips

I’ve been having so much luck with rolling to see who goes first. I’m so spoiled.

This was an 1850 point battle with my Orks against Ashley’s Space Wolf army.

Turn 1:
My kommandos and stormboyz bounded forward into the tough ruin cover in the middle of the table. As usual, all other units generally advanced, except the shokk attack gun.
(See one of my new squads that I painted recently below, yay!)

Space wolves plopped down two drop pods. The rune priest promptly blasted away some of my boyz and 1 mega nob. Also, the wolves engaged my 30 gretchin and wiped the whole squad. More fire poured into my kommandos and stormboyz.
(I can’t recall who got first blood, I think I did, but now that I think about it, it must have been the gretchin) 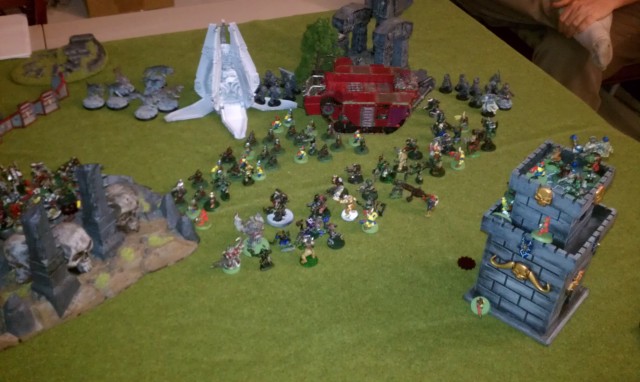 Turn 2:
Time to get stuck in! The Battlewagon rolled forward and disgorged the nob squad to engage one grey hunter unit. My boyz (that had been decimated by fire) charged forth to engage the rune priest and his squad. My deff koptas came on the board not on the side I would have hoped (but did support against the rune priest unit). My storm boyz got wiped out and my kommandos tore through one long fang squad. The left flank was looking pretty sorry against the horde of Space Wolf cavalry coming in to clash with my units.

Turn 3:
By the end of Turn three, the right flank completely belonged to the orks (as well as both objectives there). The left side of the board was inundated in close combats, most of which were stalemates slowly going in the favor of the Space Wolves. The Nob squad marched that way to join in the battle.

At this point, the battle was pretty much a done deal. My commander was safe from enemies, I held most of the objectives and the enemy warlord was dead. It was still close in the victory points, but the orks controlled the battlefield and won by a single point.

Visit my Facebook Fan Page to connect: http://www.facebook.com/DavidHunterPhillips While not working as a GeoInt Analyst in the Washington DC metro area, D. Hunter Phillips enjoys a life-long love of sci-fi, fantasy, role-playing games, and a great many other nerdy things that he explores through writing and games. D. Hunter regularly writes board game reviews at BoardGaming.com. Through his writing, D. Hunter hopes to inspire and speculate on the future and the past. He seeks deeper meanings within pulp genres of fantasy and sci-fi. D. Hunter enjoys the tales of John Ringo and Charles Stross. D. Hunter's readings lead him in a never ending cycle of sci-fi, history, physics, and psychology. D. Hunter enjoys going to DC area Goth clubs and seeing some of his favorite bands, such as VNV Nation. He also loves his home life with his partner in crime and several pets.
View all posts by dhunterphillips →
This entry was posted in Gaming, Miniatures and tagged 40k, battle report, orks, space wolves, warhammer 40k. Bookmark the permalink.