I felt I needed an Elysium from my boredom and confusion

Posted on October 28, 2013 by dhunterphillips

I was bound to be utterly disappointed by a movie at least once this year. I didn’t think it would be Matt Damon and the guy that made District 9.

Despite my doubts though, Elysium was a pretty big let down after all. I should have expected it after what most of the people I knew had seen it. I actually hadn’t heard a single friend say they’d liked it. 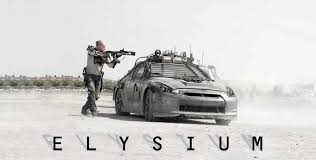 At one point in the movie, the cool robot droids are completely absentee. They go from being everywhere and a serious challenge to literally just gone. No explanation or anything. They do briefly appear, but it still doesn’t make a whole lot of sense.

The flashbacks to the main characters childhood are boring and I felt almost genuinely insulted, like I was being treated like a simpleton. The flashback was pretty much the exact same scene ever single time. I felt like they didn’t think that I could actually understand any more than that.

The other infuriating part is that there were actually some cool characters, i.e. mercenaries. The part that made me more angry about the characters is that they did NOTHING with them.

Also, the final fight of the movie was extremely reminiscent of Serenity. Not in a bad way, it was a fun little fight, though it was not enough to save the movie at all.

Skip it unless you love sci-fi and ran out of other movies.

Visit my Facebook Fan Page to connect: http://www.facebook.com/DavidHunterPhillips While not working as a GeoInt Analyst in the Washington DC metro area, D. Hunter Phillips enjoys a life-long love of sci-fi, fantasy, role-playing games, and a great many other nerdy things that he explores through writing and games. D. Hunter regularly writes board game reviews at BoardGaming.com. Through his writing, D. Hunter hopes to inspire and speculate on the future and the past. He seeks deeper meanings within pulp genres of fantasy and sci-fi. D. Hunter enjoys the tales of John Ringo and Charles Stross. D. Hunter's readings lead him in a never ending cycle of sci-fi, history, physics, and psychology. D. Hunter enjoys going to DC area Goth clubs and seeing some of his favorite bands, such as VNV Nation. He also loves his home life with his partner in crime and several pets.
View all posts by dhunterphillips →
This entry was posted in Film, Review and tagged District 9, Elysium, Matt Damon, movie, robots, sci-fi, theater. Bookmark the permalink.