Posted on October 21, 2014 by dhunterphillips 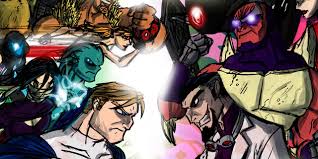 Lesley and I tried out Sentinels of the Multiverse while we were in Chicago. We went to Dice Dojo, which is an EPIC game store. They have a giant wall of opened games that you can try and then you can go into the shop and buy them. I’ve known of Sentinels for a long time, but for whatever reason, I never felt the interest to try it. I think some of it has to do with looking for more co-op games and Lesley likes Super Hero themed things.

We are really loving this game!! The theme shines and the game play is sweat inducing and easy to envision.

Pros:
The theme of the game is just dripping from everything. The rulebook has comic book like font. The card art looks like comic panels and each card even comes with a quote on it.

The potential for the game to be varied with expansions is high with mixing the villains and the environments. I LOVE the lord of the rings card game, but I really like the idea that here, you can sort of create your own story by mixing the different villains and environments with each other.

The heroes have stories in the book and each hero has a pretty neat story. Also, rather than being a deck building or deck construction game, this game actually has pre made decks for each hero. The hero card that games with the deck looks like a comic book cover with that heroes name, hit points where the issue number would go, and that character’s starting power.

Some might see the numbers of repeat cards in the hero decks as a con, but really, for some heroes, it is a must. The card draw mechanic almost just seems like an easier way simplify the game where really, you should be able to pick whatever powers you want.

The simplicity is only a con for people that want incredibly crunchy games. There are enough strategy and options to make the game good, but also that simplicity keeps it accessible.

The math doesn’t get out of control, but the bonuses and penalties need to be monitored, fortunately, this is helped by tokens provided with the game.

The four villains and four environments don’t allow for a huge amount of re playability. I do wish that there were multiple scenario cards with each villain to give a different feel when you fight that same villain. That would also be very thematic. Legendary has this done well.

Try this game! Learn how to play it and then you’ll at least want to play it as a longer filler game if not a game to play all evening.

Visit my Facebook Fan Page to connect: http://www.facebook.com/DavidHunterPhillips While not working as a GeoInt Analyst in the Washington DC metro area, D. Hunter Phillips enjoys a life-long love of sci-fi, fantasy, role-playing games, and a great many other nerdy things that he explores through writing and games. D. Hunter regularly writes board game reviews at BoardGaming.com. Through his writing, D. Hunter hopes to inspire and speculate on the future and the past. He seeks deeper meanings within pulp genres of fantasy and sci-fi. D. Hunter enjoys the tales of John Ringo and Charles Stross. D. Hunter's readings lead him in a never ending cycle of sci-fi, history, physics, and psychology. D. Hunter enjoys going to DC area Goth clubs and seeing some of his favorite bands, such as VNV Nation. He also loves his home life with his partner in crime and several pets.
View all posts by dhunterphillips →
This entry was posted in Card Game, Gaming. Bookmark the permalink.