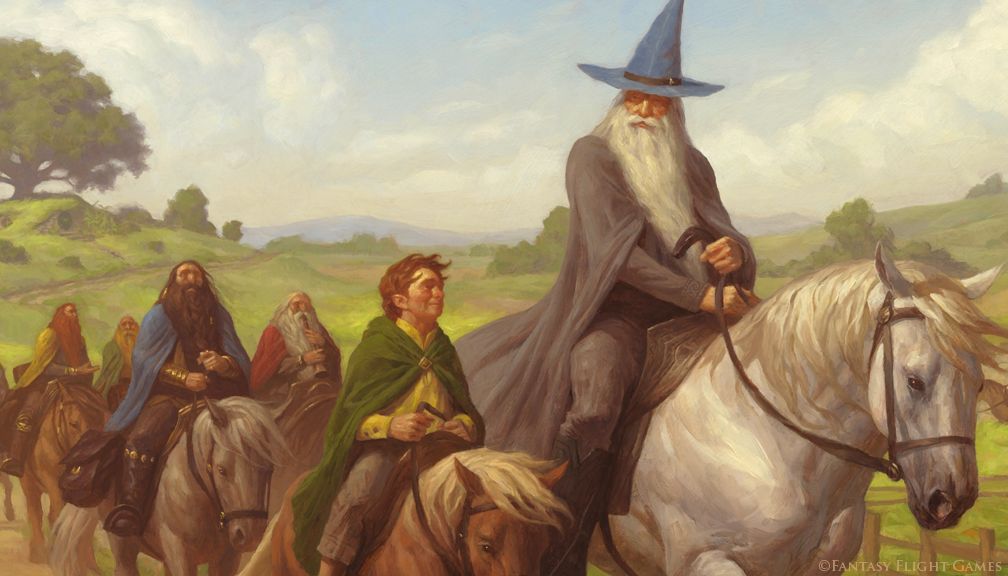 I recently introduced some friends to the Lord of the Rings LCG. They are interested in story elements in games and they like the books, so I decided, well let’s play the Hobbit quests.

I’d forgotten how wonky some of those quests are and I don’t think I’ve ever had bad luck with the wonky elements in the past run throughs I did with these quests. I’m also pretty sure that these quests are just not good as early intro quests for people to play. The way that the staging areas split and some of the rules exceptions from the quests, it starts to get pretty confusing. I do normally really like this game, but I think that with these quests, 4 players just really adds some serious complexity to the way these quests are designed.

I’ve played the first two quest lines and the Khazzad Dum box quests so many times, and I really didn’t want to dive back into those. I was also thinking that I didn’t want to do a different cycle quest line, because for some reason, I thought the story wouldn’t be as good. Now, after playing through most of the Hobbit quests, I’m pretty sure that the story playing out in the cards is actually a little weaker. I think this must have something to do with the fact that the quests need to follow the path of the books instead of building their own natural narrative.

I’m still very excited to delve deeper into the quests that I’ve never gotten to play. I did get to play test most of the quests out now, but I stopped being interested in that, because I started finding that I was less excited to play the new quests when they came out.

Now with a bit of separation and with a lot of card organization, that I will get into later, its time to explore again.

Visit my Facebook Fan Page to connect: http://www.facebook.com/DavidHunterPhillips While not working as a GeoInt Analyst in the Washington DC metro area, D. Hunter Phillips enjoys a life-long love of sci-fi, fantasy, role-playing games, and a great many other nerdy things that he explores through writing and games. D. Hunter regularly writes board game reviews at BoardGaming.com. Through his writing, D. Hunter hopes to inspire and speculate on the future and the past. He seeks deeper meanings within pulp genres of fantasy and sci-fi. D. Hunter enjoys the tales of John Ringo and Charles Stross. D. Hunter's readings lead him in a never ending cycle of sci-fi, history, physics, and psychology. D. Hunter enjoys going to DC area Goth clubs and seeing some of his favorite bands, such as VNV Nation. He also loves his home life with his partner in crime and several pets.
View all posts by dhunterphillips →
This entry was posted in Card Game, Gaming and tagged board game, FFG, lord of the rings, lotr lcg, review. Bookmark the permalink.